If you follow my blog you might have noticed some changes. That is because some things have happened in my life and it is changing everything. It is exciting times.

Throughout our lives we are given an identity. An identity that people know us as. Throughout my life I’ve had many identities. Many identities I gave myself, many were given to me by others.

My identities were worthless, no good, shy, nice, different from the others. Each one of these defined me and I felt like they were me. For most of my life I struggled with these.

In 2012 I gained a new identity: Christian. But underneath the Christian umbrella there were so many identities: discipler, mentor, pastor, teacher, studier of God’s Word, missons person. All of these too were a burden to me. So many to keep up with. My image was tied to the things that I did.

This past Tuesday night, as I have often done over my past three years as a Christian, I struggled with my identity. I struggled and felt worthless because even my “roles” and identities that I had made for myself within the Christian context could not fulfill me.

Often times I have let others or myself decide my identity and not the true Creator of my identity, God the Father. I go to others when I’m down so they can puff my ego back up and I can keep living this pride saturated life.

But this night was different. As I began to text exes and friends for them to define me once more, I stopped. The only person that had the answer to my question of who I was was God Himself. And I finally cried out and asked Him the question I desired to know most, “Who am I?”

And within a few seconds He answered. He answered with the words from a Casting Crowns song. “I am Yours.” This statement completely rocked my world. Tears flowed. I was overwhelmed.

All this time as a believer I had focused so much on what I did, and that was my identity. And when I couldn’t help others or teach others or be there for others I felt worthless because I saw this as my identity.

What freedom I received that night when I realized that my identity, my one and only identity is that “I am His.” It freed me from the burden of all the other identities that I had been carrying around with me my entire life, even after I became a Christian. It freed me from fears. It freed me from others opinion of me.

My image and identity was no longer what I did. Therefore, what I did was now just an overflow of who I already was. This verse that I read the other day really nailed it home for me:

“For you are a people holy to the LORD your God. The LORD your God has chosen you to be a people for his treasured possession, out of all the peoples who are on the face of the earth. It was not because you were more in number than any other people that the LORD set his love on you and chose you, for you were the fewest of all peoples, but it is because the LORD loves you and is keeping the oath that he swore to your fathers, that the LORD has brought you out with a mighty hand and redeemed you from the house of slavery, from the hand of Pharaoh king of Egypt.” (Deuteronomy 7:6-8)

Oh what a glorious freedom that we have in knowing that our identity is permanently stable in that we are “His.” It is a freedom that one can hardly describe. It is something that we are continually learning and being redeemed in, sanctified, growing more into the likeness of Christ, set apart.

This realization of my own identity in Christ has given me an even fuller understanding of the gospel:

We were created from the beginning to be image bearers of God. “Then God said, “Let Us make man in Our image, according to Our likeness.” (Genesis 1:26). Our very purpose and nature from the beginning was to bear the very image of God. But sin blinded us to the fact that our one and only identity was found in God and that we were created for this and for Him. We see this very early on in the Tower of Babel where the people say: “Let us make a name for ourselves” (Genesis 11:4). We see clearly that man lost his understanding of his identity with God. He rebelled against it. In Romans 1:21-22 it says: “For though they knew God, they did not glorify Him as God or show gratitude. Instead, their thinking became nonsense, and their senseless minds were darkened. Claiming to be wise, they became fools and exchanged the glory of the immortal God for images resembling mortal man, birds, four-footed animals, and reptiles.” Man though they “knew” God did not honor Him as Lord. They exchanged the glory of God, their identity, for worthless images. God though would make a way to redeem His people. He would bring His people back into relationship and identity with Him. How? Through His Son. His Son, Jesus Christ, would come to the earth, live a perfect life as a man, and die on the cross, and God would resurrect Him, freeing us from the tainted image of sin and taking away the blindness from our eyes, allowing us to enter into relationship with God once more, as our Lord and Savior, as our identity and image, our purpose and joy.

What a gracious gift the Lord could give us. Restoring us to our rightful image as image bearers, as His possession, as His children.

If you are struggling with your identity today and who you are, don’t ask others. They don’t truly know who you are. Go to One who created you, the one you were created for, to enjoy, to honor, and to love. He is our great portion. He is the provider of our needs.

In Christ alone my hope is found;
He is my light, my strength, my song;
This cornerstone, this solid ground,
Firm through the fiercest drought and storm.
What heights of love, what depths of peace,
When fears are stilled, when strivings cease!
My comforter, my all in all—
Here in the love of Christ I stand.

In Christ alone, Who took on flesh,
Fullness of God in helpless babe!
This gift of love and righteousness,
Scorned by the ones He came to save.
Till on that cross as Jesus died,
The wrath of God was satisfied;
For ev’ry sin on Him was laid—
Here in the death of Christ I live.

There in the ground His body lay,
Light of the world by darkness slain;
Then bursting forth in glorious day,
Up from the grave He rose again!
And as He stands in victory,
Sin’s curse has lost its grip on me;
For I am His and He is mine—
Bought with the precious blood of Christ.

No guilt in life, no fear in death—
This is the pow’r of Christ in me;
From life’s first cry to final breath,
Jesus commands my destiny.
No pow’r of hell, no scheme of man,
Can ever pluck me from His hand;
Till He returns or calls me home—
Here in the pow’r of Christ I’ll stand.
(http://www.gettymusic.com/hymns-inchristalone.aspx) 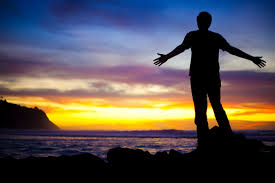